Harvest OPC began as a Bible study in 2014 as members of the Covenant Reformed OPC in Mt. Airy who lived in Winston Salem wanted to see a new church planted in their home town. Under the oversight of the elders of Covenant Reformed Church, morning worship services began for Harvest Church on May 31, 2015. In December of 2018, Pastor Calvin Keller was called to be the organizing pastor of Harvest Church. Pastor Keller came to the work with 26 years of pastoral experience. 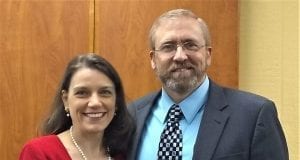 The Orthodox Presbyterian Church was founded on June 11, 1936, in the aftermath of the fundamentalist-modernist controversy, under the leadership of J. Gresham Machen (longtime professor of New Testament at Princeton Theological Seminary, who also founded Westminster Theological Seminary in1929). With the infiltration of theological liberalism, the mainline Presbyterian Church in the USA had departed from historic Christianity, including the rejection of doctrines such as the inspiration and authority of Scripture, the virgin birth of Christ, and the substitutionary atonement. Originally calling itself the Presbyterian Church of America, the young church was forced by the threat of a lawsuit to change its name in 1939, and it adopted the name Orthodox Presbyterian Church.

In nearly eight decades since its founding, the OPC has grown to over 30,000 members in over 300 churches throughout the United States and Canada. It has been vigorous in its defense and propagation of the historic Reformed faith as expressed in the Westminster Confession of Faith and Catechisms. The church’s efforts in worldwide outreach are conducted largely through three denominational standing committees: foreign missions, home missions and church extension, and Christian education. The OPC recognizes other churches of like faith and practice and is a member of the North American Presbyterian and Reformed Council (NAPARC) and the International Conference of Reformed Churches (ICRC).

More information about the history of the OPC can be found in the booklet, What is the OPC?

Join Us for Worship

We invite you to join our two Sunday Services at 11:00 AM and 6:00 PM in person or on Zoom Click here for Zoom link.